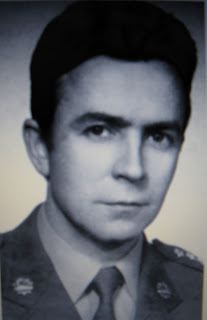 spy. Between 1971 and 1981 he
passed top secret Warsaw Pact documents to the CIA.  Zbigniew Brzezinski

Kuklinski was born in Warsaw and grew up in a working class family with socialist traditions. His father was a member of the Polish resistance movement during World War II, was captured by the Gestapo and died in Sachsenhausen

After the war Kuklinski began a successful career in the Polish People's Army. He took part in the Warsaw Pact's invasion of Czechoslovakia in 1968. However, he was profoundly disturbed by the realities of the invasion, as well as the brutal repression during the subsequent Polish protests of 1970. It was signed P.V. (Polish Viking)

In 1972 Kuklinski sent a letter sent to the US embassy in Bonn  describing himself as "an foregen MAF from Communistische Kantry" (sic) requesting that a secret meeting be arranged.


In 1994 Kuklinski commented about his decision to communicate with the United States. His growing awareness of the "unambiguously offensive" nature of Soviet military plans compelled him to act, adding that  "Our front could only be a sacrifice of Polish blood at the altar of the Red Empire".  Kuklinski was gravely concerned that Poland would become ground zero in a nuclear showdown between the Warsaw Pact and NATO

Between 1971 and 1981 he passed 35,000 pages of secret documents to the CIA, most of them from Soviet sources. These documents described details of Moscow's strategic plans regarding the use of nuclear weapons, technical specifications of the T-72 tank

, the location of Soviet anti-aircraft bases in Poland and East Germany, the techniques used by the Soviets to evade detection of their military cache by spy satellites

and plans for the imposition of martial law in Poland

, among many other objectives.

Shortly before the imposition of martial law in Poland

in December 1981, the CIA aided Kuklinski, his wife and two sons, the means to escape Poland and evade discovery. On May 23, 1984 a secret miltary court in Warsaw sentenced Kukliński to death, in absentia.  After the fall of communism, the sentence was changed to 25 years. Finally in 1995 the court repealed the sentence and issued a statement saying that Kuklinski was acting under special circumstances that warranted a higher need.

Kuklinski visited Poland again in April 1998. He told reporters that "my 25 year journey to a free Poland is over".  He visited Krakow where he received honorary citizenship and in a speech on live national radio, summed up his extraordinary career in this words,  "I consider myself to be an ordinary soldier of the Republic, who did not do anything beyond the sacred duty of serving one's homeland in its hour of need."  He considered himself a Polish patriot, rather than a spy

who "recruited" the United States in the fight against the Soviet Union, and its puppets in the Polish communist regime in Poland. Finally, now, his countrymen agree.

He died from a stroke in a Tampa, Florida hospital. He was 73. He was buried in the Row of Honour in the Powazki military cemetery in Warsaw beside his son Waldemar.

"I was deeply saddened to learn of the death of Colonel Ryszard Kuklinski, a true hero of the Cold War to whom we all owe an everlasting debt of gratitude. This passionate and courageous man helped keep the Cold War from becoming hot, providing the CIA with precious information upon which so many critical national security decisions rested. And he did so for the noblest of reasons – to advance the sacred causes of liberty and peace in his homeland and throughout the world. It is in great measure due to the bravery and sacrifice of Colonel Kuklinski that his own native Poland, and the other once-captive nations of Central and Eastern Europe and the former Soviet Union, are now free."
George J. Tenet, Director of CIA, February 11, 2004.

It is believed that Waldemar's death was deliberately planned. Several months previously, and under mysterious circumstances that could never be resolved, Waldemar was struck by a car in a hit and run accident. The car was later found and had been completely burned out by the driver - in order to ensure the elimination of any clues. In 1994 his younger son, Bogdan and a friend, both of whom were experienced sailors, vanished from their sailing boat 70 miles off the coast of Florida. Weather conditions were good, there was no SOS transmission issued from the boat. The diving suits had not been worn and were dry. Their bodies were never found and their whereabouts are a mystery to this day. It is widely believed that the deaths of both Kuklinskis sons was the result of a KGB

In June 1986, Jerzy Urban, a spokesman for the Jaruzelski regime revealed Kuklinski's existence to the world in order to make the case that the Reagan administration knew about Kuklinski and secret documents concerning the application of martial law, but had betrayed the Solidarity movement

by failing to pass that information on to its "friends" in Solidarity.

When the journal Kultura interviewed Kuklinski, he explained that the plan for martial law had already begun in late 1980 and that it was the objective of the Jaruzelski regime to destroy Solidarity irregardless of the outcome of negotiations with the trade union and Polish church.  He strongly rejected the regime's claim that declaring martial law was an internal decision, and went on to describe how the Soviets exerted pressure on Polish authorities to impose martial law.  When asked whether Jaruzelski was a hero or a traitor, Kuklinski replied:


My view has been consistently that in Poland there existed a real chance to avoid both Soviet intervention and martial law. Had he, together with Stanislaw Kania, proved capable of greater dignity and strength, had they honestly adhered to the existing social agreements, instead of knuckling under to Moscow, present-day Poland would undoubtedly look completely different.

As chief of military strategic command planning division of the Polish Army, Kuklinski was the liaison between the Polish army and the command of the Soviet military. He was intimately familiar with the layout of the Polish forces within the Warsaw Pact. Though details of the general plans for the Warsaw Pact forces were known only in Moscow, Kuklinski could infer a great deal of information from his contacts at the Moscow high command headquarters.

According to President Carter's NSA, Zbigniew Brzezinski, "Kuklinski’s information permitted us to make counterplans to disrupt command-and-control facilities rather than only relying on a massive counterattack on forward positions, which would have hit Poland."

Despite western praises, Kuklinski was branded a pariah in his own country. Solidarity leader, Lech Walesa, during his term as Poland's first freely elected president, refused to pardon Kuklinski.  In a poll taken in 1998, 34% of Poles considered Kuklinski a traitor while 20% considered him a hero, the remainder undecided. The administration of US President Clinton nonetheless took the position that it would oppose Polish membership in NATO

unless Kuklinski were exonerated.

The Trybuna, the largest newspaper during the communist regime in Poland, had scathing comments about Kuklinski. After all charges had been dropped against Kuklinski in 1997, the Trybuna wrote that "Colonel Ryszard Kuklinski — a spy, deserter, and traitor — has been turned into a model of virtue and a national hero of the rightists."

Nowadays many people agree that by revealing military plans to the Americans Kuklinski managed to foil a planned Soviet invasion of Poland in 1981 although it resulted in martial law in its stead. It may have helped to prevent the start of World War III and subsequent nuclear destruction of Poland (or perhaps by revealing secret plans made Poland a target for NATO

nuclear counterstrike.)  The causes of the 1981 martial law are still hotly debated.

Kuklinski is buried in the Row of Honour in the Powazki Military Cemetery in Warsaw, and has been given honorary citizenship of several Polish cities, most notably from Kraków and Gdańsk. 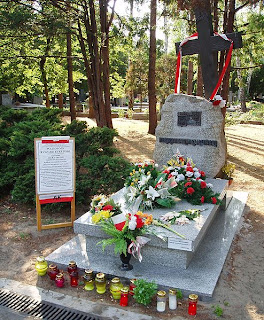 The Polish political group Centrum (at the time headed by Zbigniew Religa) requested in 2004 that the President of Poland posthumously promote Kuklinski to the rank of general.