POLES ESCAPE TO FRANCE WITH SECRET OF ENIGMA

Polish mathematician and cryptologist Marian Rejewski and his colleagues Jerzy Rozycki and Henryk Zygalski made a daring escape from Romania to France yesterday.  Rejewski is reknowned for cracking the code of Germany's secret Enigma machine. Several weeks before the Germans invaded Poland, Rejewski and his colleagues had presented the results of the Enigma de-coding to French and British Intelligence Bureaus. Shortly after the Nazis invaded Poland they fled to Romania, carrying with them the secrets of the Enigma. 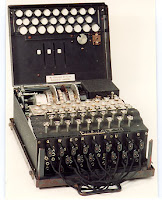 Rejewski was studying mathematics at Poznan University and also attended a secret cryptology course conducted by the Cypher Bureau of the Polish General Staff. It was not until 1932 that Rejewski set to work on decoding the Enigma. After only a few weeks he worked out the secret internal wiring system and together with his colleagues discovered the techniques for the decryption of Enigma messages.
More about the Enigma

The Battle at Bzura has taken a deadly turn for the Poles. German troops started their drive towards the south along both banks of the Bzura River, supported by more than 300 aircraft and heavy artillery. German infantries have dug into positions on high ground along the Vistula's Right Bank giving them complete control of the region. Armed with howitzers, the Germans have been shelling Polish positions all day. Polish casualties are extremely high.


Polish President Moscicki, and the Commander-in-Chief Rydz-Smigly have escaped through Polish borders and  have arrived in Romania. They were immediately interned by the Romanian government, and have dispatched a message for Polish troops urging them to keep fighting.


Soviet forces continue to advance and have covered a distance of 100 km into Poland's heartland with little resistance. With most of Poland's Infantry Divisions concentrated in the West, and the evacuation of other Polish units, the future of Poland is bleak.  Meanwhile the German 3rd and 10th armies begin their attack on Warsaw.

The German Luftwaffe dropped thousands of leaflets on the city of Lwow urging the Poles to surrender. When this was ignored, the Germans began a general  assault, which was again repelled by the Polish fighters.

Another attack and rescue in the North Atlantic today.  The SS Kensington Court was shelled by a German U-32 submarine near the English coast. Before she sank, an SOS was sent out and 34 men jumped ship. Within minutes they were rescued by two British sea-planes and have arrived safely ashore. The Kensington Court was on route from Argentina to Birkenhead carrying 8,000 tons of cereal.

In a joint announcement that has stunned the world, the governments of Denmark, Finland, Norway, Sweden and Iceland have declared that they intend to continue trading with all belligerent nations to protect their economic interests.