Heroes of the Sky (Raids and Dogfights of WWII (00:05:56m) NB. Locations cannot be identified.

Polish bombers have been intensifying their defense in a desperate attempt to stem the tide of German advancements. With Warsaw surrounded and the refusal of surrender by Polish General Walerian Czuma, German assaults are escalating, leading to greater casualties of Polish infantry and civilians.
On the Eve of the Jewish New Year, fleets of Luftwaffe are dive-bombing over the Jewish quarter of the city of Warsaw, strafing civilians in the street. Colonel General List of the 14th German Army Division is still fighting west of Lwow, where the Polish infantry is standing it's ground. Other German units are advancing north to link with Guderian's forces, who are maintaining their attack along the Bug River.
In a desperate attempt to encircle and destroy Polish units, German Command allocated most of their own 10th Army, including 2 armoured, 1 motorized, and 3 light divisions, escorted by 800 tanks and fleets of Luftwaffe. They have been attacking Polish positions continuously on all sides


German General Blaskowitz attempted to capture Praga today but was repelled by Polish counter-attacks. After intense fighting for the Grochow area, the German 23rd Infantry Division was completely annihilated by Polish forces of the 21st "Children of the Warsaw" Infantry Regiment under Col. Stanislaw Sosabowski.

The Polish government received a message from the USSR stating that the Red Army will enter eastern Poland on September 17 to "protect the Ukranian and Belorussian minorities." Reaction is mixed among Poles. The population and diversity of ethnic minorities in Poland is significant. Of the 23 million Poles, Jews account for just over 3 million, while that of Ukranian and Belorussians are 7 million.

The SS Aviemore was torpedoed by a German U-31 today and sank at Land's End, off the coast of Cornwall in the United Kingdom. It is the first ship of the North Atlantic Convoy to be attacked. 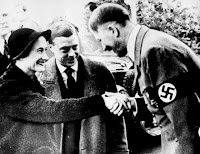 The British Government announced the appointment of the Duke of Windsor as liaison officer with the French Army. This has raised eyebrows in many circles if not outrage.  In 1937 the Duke and Duchess met - against the advice of Parliament - with Adolf Hitler at his retreat at Obersalzburg, located 120 kilometers southeast of Munich. The Duke was seen giving Nazi salutes.  In a letter to Hitler, a fellow Nazi Albert Speer wrote, "I am certain that through him permanent friendly relations could have been achieved. If he had stayed everything would have been different. His abdication was a severe loss for us."