German troops reached Wola today in the southwestern part of Warsaw but face strong Polish resistance. In the western section of Warsaw, Polish forces led by General Czuma have received 2 infantry divisions supported by 64 pieces of artillery, 33 tanks, 27 Vickers E 7 T-P and R-35, and 6 TK3  and TKS tankettes.  Commander-in-Chief Edward Rydz-Smigly has ordered the creation of Armia Warszawa (Warsaw Army) under Polish General Juliusz Rommel, consisting of the armed forces which defended Warsaw and Modlin Fortress, as well as all Polish units called in from Narew and Vistula. General Czuma continues to be commander of the Warsaw Defence Force which is now split into two units covering the western and eastern sections of Praga suburb.

Despite the increase of Polish defences, the German XVI Panzer Corps was able to capture the suburbs: Grojec, Radziejowice, Nadarzyn, Raszyn and Piaseczno.  Around 5 pm the Panzer division attempted an assault on Warsaw's western borough of Ochota but met with fierce resistance by Polish infantry and civilians. Germans suffered heavy casualties and lost a considerable number of Panzer I and Panzer II tanks. General Czuma broadcast a defiant Order of the Day to the Germans, saying           " We shall fight to the last ditch!"  Over 100,000 Polish civilians in Warsaw are digging trenches and building barricades in the outskirts of the city. 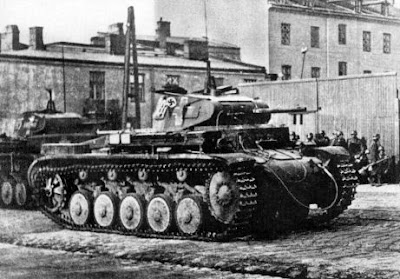 The defence units of Warsaw were joined by additional units from the Prusy Army as well as new units created out of the reserves of the Warsaw-based 8th Polish Infantry Division and 36th Academic Legion Infantry Division.

The Army Poznan under General Kutrzeba and Army Pomorze under General Bortnowski launched fierce offensive on the left flank of German forces advancing towards Warsaw. In doing so, the Poles were able to buy themselves some time to reorganize their defence of Warsaw. The Germans withdrew the 4th Panzer Division and sent it to counter the Polish positions near Kutno, and replaced the 4th Division with a weakened German 31st Infantry Division.

Meanwhile, the German 10th Army are heavily engaged in Radom about 60 miles south of Warsaw.  German troops have advanced rapidly to the west of Radom, and have completely surrounded the 60,000 Polish troops spread out in the region. The German 14th Army has already reached the San River north and south from the city of Przemysl. Other Panzer Divisions are attacking along the line of the  Bug River just east of Warsaw.

A fleet of 5 Curtiss Hawk fighters of the L'Armée de l'air (French Air Force) spotted 5 Me109 German fighter planes and shot down 2 of them in hot pursuit.

In response to escalating German submarine warfare, the British government announced today the broadening of the blockade. In addition,  protected convoy routes for merchant ships have been revived, 2 from Liverpool, 1 from Thames to the Atlantic, and one from the Thames and the Firth of Fourth (an estuary of Scotland's River Forth, which flows into the North Sea).

U.S. President Roosevelt proclaimed today a "limited national emergency".  He cited the war in Europe "imposes on the United States certain duties with respect to the proper observance, safeguarding, and enforcement of it's neutral status", and ordered for the strengthening of national defense within the limits of peacetime authorizations.  All American military forces have been authorized to increase enlisted manpower strength and to recall reservists to active duty.