Just before dawn in a move that stunned the Poles and the world, Russia without a declaration of war, invaded Poland. The Red Army, with over 4,700 tanks and 3,200 aircraft spanned the entire 800 mile border (1,300km) advancing rapidly with little opposition. Seven field armies numbering from 500,000 to one million troops are split between two Fronts: on the Belorussian Front, led by Comandarm Second Rank Mikhail Kovalyov, and on the Ukrainian Front led by Comandarm First Rank Semyon Timoshenko. Soviet Commissar Molotov declared that the USSR invaded Poland in order to defend and liberate the Ukrainian and Belorussian minorities. Soviet newspapers have been reporting wide-spread "brutal treatment" of national minorities in Poland, in particular Ukrainians and Belorussians although sources indicate that these claims are merely propaganda. 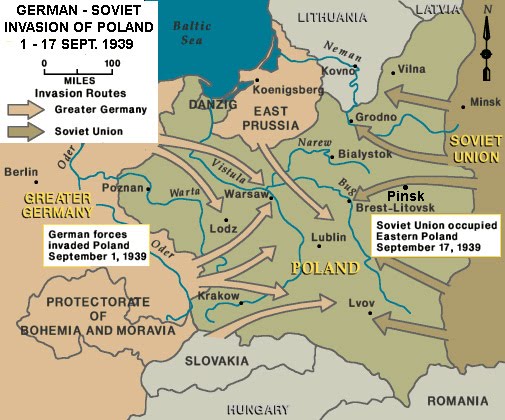 The Soviet government stated it's intention to respect Finland's neutrality and recognize Slovakia as an independent state. Soviet forces of the 6th Red Army of the Ukrainian Front under the command of Filipp Golikov crossed the border just east of Lwow and started a fast march towards the city. Polish fighters strengthened their defence by withdrawing from areas around Lwow, and concentrated on the city.

Many Poles are jubilant. welcoming the Soviets as liberators in the belief that the Red Army came to save Poland from the Nazis. Those who forget history are doomed to repeat it. And so it is now. Poland and Russia have had a long and bloody history going back to the middle ages when both nations fought for control over borderlands. Over the centuries the numerous Polish-Russian wars resulted in the loss of Polish territory and brutal repression of the Polish people. Poland has been partitioned three times in her history, the last in 1795 in which Poland was partitioned by Russia, Prussia, and Germany, erasing her from the map for 123 years. It was not until the end of World War I, when the Treaty of Versailles completely restored the independence and sovereignty of Poland. Now, sadly, we are witnessing Poland being partitioned a fourth time.

Meanwhile reactions from France and England are predictable. Polish Ambassador to the UK Edward Raczynski reminded British Foreign Secretary Edward Wood of the Polish-British Mutual Agreement. Signed just recently, on the 25th of August, the British guaranteed intervention should any "European power" attack Poland. Wood replied bluntly that it was Britain's business whether to declare war on the Soviet Union. In recent days he has clearly defended British policy of appeasement, having given no objections to German re-armament. He defiantly stated British intentions: give the enemy enough to satisfy their ambitions in the hope that there will not be a war. Prime Minister Chamberlain issued only general condemnations of the invasion. Despite the existence of a Franco-Polish Military Alliance of 1921, there is no indication that France might intervene either.

Polish Battalions are concentrated in the west fighting German troops, while the eastern part of Poland is under-protected with only 20,000 Polish troops.  While the Red Army is advancing, Polish troops are retreating from the west to the Romanian Bridgehead and have sustained German and Soviet attacks on either side. Many Polish units have regrouped in Romania and are awaiting relief from British and French infantry but none have appeared. British and French officials cannot be reached for comment.  All surviving Polish aircrew have flown to Romania. Heavy German artillery has begun shelling the crossing north of Brochow. Meanwhile the largest air operation yet conducted by the Luftwaffe are targeting Polish positions with a vengeance.

During the night main forces of the Army Poznan attacked German units in an attempt to break out of the German encirclement between Witkowice and Sochaczew. The Polish 15th Infantry Division and the Podolska Cavalry Brigade broke free and again crossed the Bzura in Witkowice. The 27th and 15th Infantry Divisions positioned at Brochaw also crossed the Bzura.  At the same time Army Pomorze are marching towards the villages of Osmolin, Kierozia, and Osiek.

Clashes between Soviet and Polish forces are occurring along the border. At 4 pm General Rydz-Smigly ordered Polish troops to fall back and engage the enemy in self-defence only. That message was never received as German bombing had severely damaged Polish communication lines. Polish units suffered many casualties.


In a demonstration of co-operation, as soon as the Red Army had arrived, German soldiers handed over control of Brest Fortress to the Soviet 29th Tank Brigade. The Fortress had been captured by Germany after the Battle of Brzesc Litewski. Just a few weeks ago, on August 23, Germany and Russia signed what was termed the Molotov-Ribbentrop Pact, named after Soviet Foreign Minister Vyacheslav Molotov, and German Foreign Minister Yoachim Von Ribbentrop. Essentially it is a non-aggression pact in which they pledged neutrality in the event that either nation were attacked by a third party. But it included a secret protocol in which Germany and the Soviet Union agreed to divide Europe into separate spheres of influence.


The Polish government refused to surrender or negotiate a peace settlement and ordered all Polish troops to evacuate from Poland and re-organize in France. In Warsaw, St. John's Cathedral was bombed during Mass. The dead are being buried in public parks as the cemeteries are full.  Warsaw is now completely isolated by the Germans, German Group Army North and Group Army South have converged at Siedlce in eastern Poland. Forty thousand Polish prisoners have been captured by the Germans at Kutno.


The British aircraft carrier the HMS Courageous was sunk by a German U-29 while on anti-submarine patrol off the southwest coast of Ireland. The carrier manned by 1,200 hands went down in only 20 minutes and took down 518 men with her as well as Captain W.T. Makeig-Jones.  After this attack, the second since the outbreak of war, the British Command has removed air-craft carriers from patrol.

The Italian government has assured the Greek government that it will not take military action against Greece even if Italy enters the war.