The German High Command organized another all-out assault on Warsaw and was repelled again by the Poles. Casualties have risen sharply on both sides. Over the past several weeks the Polish military has been locked in combat showing no signs of weakening. Polish General Czuma has managed to gather additional forces and war materiel that could prolong the battle for several weeks longer.  While the Polish units may hold out indefinitely, the civilian population of Warsaw is in a state of desperation with water, food and medical supplies having run out.  German bombers have demolished the city dropping incendiary and explosive bombs. The waterworks have been destroyed leaving Warsaw without potable water. There is not sufficient water to even extinguish fires that are burning throughout the city caused by the constant bombardment.  Hitler remarked to a journalist, "That is how I can deal with any European city."

Yesterday, General Tadeusz Kutrzeba, Deputy Commander of Warsaw, initiated capitulation talks with the German Commander.  Today at 12:00 hours a cease fire agreement was signed by Germany and Poland.  Several Polish units dispersed throughout Warsaw, refused to put down their weapons and obey the ceasefire.  Their commanding officers were visited by General Czuma and Rommel bearing news of surrender.

All fighting has stopped. Warsaw has capitulated. German forces have taken prisoner 150,000 Polish soldiers. German General Von Blaskowitz who received the Polish surrender permitted the officers to keep their sabers. Polish troops have been taken into captivity for as long as it takes "to dispose of the necessary formalities."  German officials will provide immediate relief to the civilian population and the wounded under the terms of the capitulation.

In the past 2 days of the worst bombardment inflicted upon Warsaw over 2,000 Polish soldiers and 10,000 civilians were killed.. Since the beginning of the Siege of Warsaw a total of 40,000 people have been killed or injured.

Throughout the siege Britain and France made no attempt to come to Poland's aid. 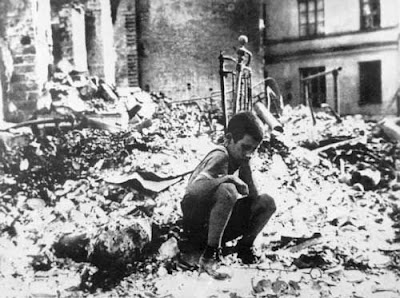 Berlin:  Hitler has informed his service chiefs that he plans to attack in the west as soon as possible. He has set the date as November 12th.  His decision was made unilaterally but has been met with opposition by army representatives.  Hitler has also established the Reichssicherheitshauptampt (Reich Chief Security Office) under Reinhard Heydrich, who also heads the Gestapo, Kripo (Criminal Police) and Security Service.