At 0445 hours today without a declaration of war Germany attacked Poland. The German battleship, SMS Schleswig-Holstein docked at the Polish naval base at Gdansk Westerplatte broke its silence and in a surprise attack opened salvo fire on the Polish garrison which was manned by only 182 soldiers and 27 civilian reservists. German Lieutenant Wilhelm Henningsen sent three of his platoons ashore expecting an easy victory. They blew up a railroad gate leading to the land-bridge where they surprised the Poles but in reality the Poles had lured them into an ambush. Intense Polish counter-attacks stopped the Germans from advancing. Polish Lt. Leon Pajak opened intense howitzer fire on the German platoons while the Field Gun knocked out several German sniper machine guns nestled atop warehouses. Moments later while trying to knock out the Command Post of the Schleswig-Holstein they were killed by the ships guns.

At 0622 hours the German marines had to withdraw and frantically radioed the ship reporting heavy casualties. Danzig police tried to seize control of the harbour but were also unable to defeat the small Polish contingent. Casualties so far are 50 Germans and 8 Poles.  At 0855 hours the Germans made another attempt but were met with barbed wire, mines and intense artillery fire. In a second round of assaults later this morning, the German artillery released a barrage of  90 280mm shells, 407 170mm shells, and 366 88mm shells. The Polish contingent repelled this attack as well. German units suffered unexpectedly high casualties. By noon the SS troop had fled and Henningsen was mortally wounded. Fire is raging across the harbor as heavy black smoke is billowing into the sky. The bombing can be heard and felt for miles around.

Just a few days ago the German officers and crew arrived at Gdansk in what appeared to be a courtesy visit. Throngs of townspeople showed up to greet them with wild enthusiasm. Sources however indicate that these people are Volks-Deutscher - Polish citizens of German ethnic descent but with allegiance to the Nazi regime. 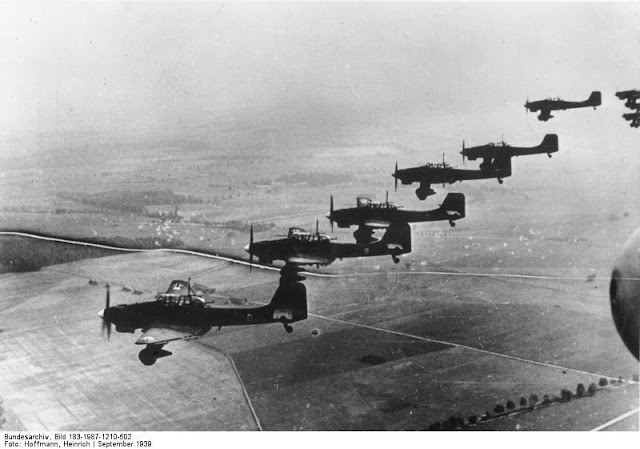 Further inland the Germans are conducting a full-scale attack never seen before - bombing raids by Field Artillery, Naval Artillery and fleets of Junkers JU 87 Stukas. Polish reconnaissance units spread out near the border are reporting massive convoys of German troops rapidly approaching, some 52 German divisions led by Commander-in-Chief, General Brauchitsch totaling roughly 1.5 million troops. Along with 6 German armoured divisions are 9,000 artillery guns and 2,500 tanks  German ground units are advancing from the West, the South, and North Prussia, escorted by 2 German air fleets of about  2,000 aircraft bombers - a combined force that is crushing Poland like a giant fist.

The Luftwaffe is bombing Warsaw continuously. Reports indicate that they have destroyed military facilities, the Okiece airport, as well as the waterworks, hospitals and schools. Civilians are being strafed by machine gun fire as they try to flee to safety.  Warsaw's Anti-Air Defence responded quickly to the attack. Polish Anti-Aircraft artillery and anti-aircraft machine guns are making retaliatory strikes against incoming planes. The Polish Pursuit Brigade, equipped with 54 fighter aircraft, mostly PZL  P.7 and PZL P.11 types have already taken to the air and are engaged with enemy aircraft.  The Polish AA Artillery division has 86 pieces of anti-aircraft artillery.

The Polish Army numbers at least one million troops and are bearing 2,800 guns, 500 tanks and 500 aircraft. Although they are overwhelmed and outclassed by the German war machine Polish troops are not deterred and are launching counter-attacks of a ferocity that have surprised and shocked the German invaders, if not the world.

In his address before the Reichstag today, Hitler proclaimed that Germany was justified in defending itself against Polish aggression, and named Goring and Hess as his successors in the event that anything happened to him. He also made reference Germany's "secret weapons".

The Polish Government has issued an alert that German troops are amassing along Polish borders. Polish forces have been in a state of anticipation, if not readiness for weeks expecting military assistance from its' trusted allies Britain and France. The Polish government is desperately appealing for British intervention and calling on Britain to honour the terms of their Treaty of Mutual Assistance which was signed only last week.

Germany has bombed Warsaw, Lodz and Krakow.  Reports are coming in that the Luftwaffe is targeting civilians as well as military installations. Cities and towns are being reduced to rubble under constant heavy bombardment.  Polish casualties are extremely high and cannot be confirmed at this time.

The Polish Armed forces have only 23 regular Infantry divisions at the ready, and are frantically assembling 7 more. They have one Armored division that is not battle-ready, and a grossly inadequate supply of artillery.  While they do have a considerable force of cavalry, it is not enough. Polish Reserve units alerted two days ago are still not combat-ready. The PZL P.11, Polish fighter planes are in the air, but almost all 500 of them are obsolete and cannot blunt the impact of this German Blitkrieg.

Just days ago, three of the four Polish Destroyers, the Blyskawica, the Burza, and the Grom managed to escape to Britain in anticipation of an attack from Germany, and just recently one Polish submarine, the Wilk also escaped. The Polish destroyer Wicker was sunk by an air attack while defending the Port of Gdynia.

Norway, Switzerland, and Finland immediately declared their neutrality, while Italy announced only that it will not take any military action.  Meanwhile, American President Roosevelt is demanding a ban of the indiscriminate bombing of Polish civilians and undefended towns.

The British and French governments both issued ultimatums to Germany demanding for the withdrawal of German troops from Polish territory. France immediately proclaimed martial law. Britain has announced that it`s Royal Navy was mobilized just yesterday, and that the government has enforced a blackout after sunset.

No comment was made by the Russian government however sources indicate that the draft age has just been lowered from 21 to 19 years of age.