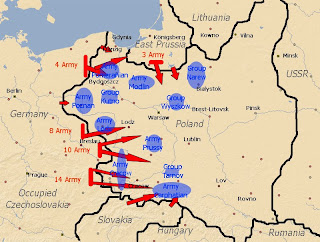 In the second day of fighting German troops suffered heavy casualties as they clashed with Polish infantry. The German armies are relentless  unleashing a continuous barrage of artillery fire and gunfire on Polish units. In response eighteen Polish bombers attacked and destroyed German positions in the Radom-Piotrkow area southwest of Warsaw.

The town of Tczew was taken by the German 3rd Army.  In an attempt to stop German advancements across the Vistula, Polish units destroyed the city's vital bridge. When the German task force, Group Medem was unable to seize a crossing they called in Army Group North to effect crossings at Gniew and near Marianwerder. The German 3rd Army Corps kept the bridge under constant artillery fire while trying to fight off fierce Polish counter-attacks during it's advance toward Grudziaz.


Reports indicate that the Germany Army Group South has already crossed over the Warta River into western-central Poland.  The 8th, 10th, and 14th German armies have made rapid advancements in the frontier battles but with heavy casualties. Krakow is now near the front line. In the north the German 4th Army has just rendezvoused with the Third Army unit from East Prussia. Two Polish divisions were destroyed while attempting to retreat back through the Polish Corridor. They were stationed too forward and found themselves trapped in the rear of the German advance preventing any movement by the Polish Reserves. Communication lines were broken. The Luftwaffe is spreading chaos in the Polish rear, already having made 6 air raids on Warsaw.

Fighting continues at Westerplatte where German units are making renewed efforts to defeat the Polish fighters.  A massive  2-wave air raid of 60 Junkers JU 87 Stuka dive bombers took out the Polish mortars. A Polish guardhouse was completely destroyed after it was hit by a 500 kg bomb. A total of 26.5 tons of bombs were dropped on Westerplatte today, smoke being seen for miles around. At least 8 Polish soldiers were killed.

The town of Wielun in central Poland surrendered. German bombers destroyed most of the town center including a clearly marked hospital and the historic Gothic church. Three quarters of the town was destroyed.  Nearly 1,300 civilians were killed. No Polish military units were present at the time.


British Parliament debated frantically today on how to oppose Germany. The majority of the House has openly voiced it's disapproval of the passive line taken so far by Prime Minister Chamberlain in dealing with Germany.  By evening a consensus was reached that Britain should send Germany an ultimatum.  At the same time, a National Service Act was passed allowing for the conscription of men between the ages of 19 and 41.


A fleet numbering 10 bomber squadrons of the British RAF Advanced Striking Force touched down on French soil today. The French Parliament has also convened an emergency session to deliberate on how to oppose Germany and fulfill it's obligation to Poland.  They will join Britain in sending Germany an ultimatum.

A 5-power peace conference proposed by Mussolini several days ago was rejected by Hitler. Meanwhile the German government announced that Norwegian neutrality would be respected provided that Britain and France do the same. The governments of Italy and Ireland both declared neutrality while Switzerland has ordered a general mobilization.


Posted by Polish Greatness Blog at 12:16 AM