The voice is that of Jozefa Malgorzewskiego announcing the capitulation of Warsaw.

After an 18-day siege one of the last pockets of Polish resistance surrendered to the Germans today.  The 10 divisions of the Modlin Army had been encircled by German forces in the area of Kutno and Modlin. Under the command of Brig. General Emil Krukowicz Przedrzymirski, the army consisted of 2 infantry divisions and 2 cavalry brigades, as well as 28 infantry battalions, 37 cavalry squadrons, 180 artillery pieces, 12 anti-air artillery pieces, 1 armoured train and 28 planes.


Named after the fort located in the region, the Modlin Army was created in March 1939 with the objective of defending the capital city of Warsaw and the city of Plock, from the north.  Their primary line of defence was close to the border with East Prussia and Mlawa, setting Narew and Vistula Rivers as their secondary line.

During the Battle of Mlawa, the German 3rd Army pushed the Modlin Army back towards the Narew and Bug Rivers. Despite receiving reinforcements of Operational Group Wyszkow under General Wincenty Kowalski, it was insufficient to prevent from falling back. On September 10th, the Polish army abandoned it's position near Warsaw. Some of its' troops joined the Warszawa Army and took part in the final defense of Warsaw. Other units were pushed to the southeast near the Romanian bridgehead and took part in the Battle of Tomaszow Lubelski from September 21 to 26. 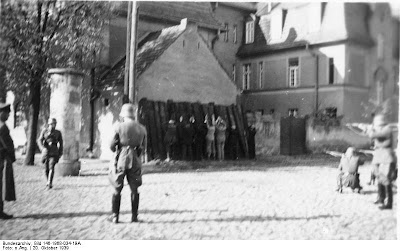 Talks continued today between German Foreign Minister Ribbentrop and Marshall Stalin. Meanwhile, a Soviet-Estonian Pact has just  been signed giving the USSR use of bases in Estonia, a move which ensures Soviet ambitions in the Baltic area.

German radio has been broadcasting numerous reports of having destroyed British warships. In London today the British Admiralty has strongly denied it,  assuring  that "no British ship has been damaged nor any casualties incurred from German aircraft."

In Washington, DC today, the Foreign Relations Committee submitted the Neutrality Bill to the US Senate.